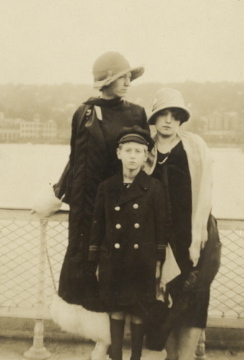 This is a photo I found in the attic while I was researching what happened to Walter Lindberg. The little boy, my father, looks sad. The man he adored was boarding a steamship for Brazil, and Dad was probably wondering whether he would ever see Walter again. The tall woman is my grandmother, Elsa, a Hungarian immigrant. What I found out about her was perhaps the biggest surprise of all. You can see one of the only photographs I have of Walter by clicking on the link under "Memoir" on the top of the column at right. 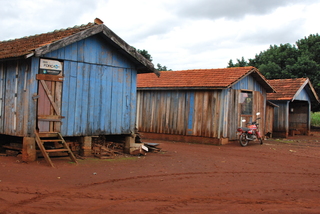 This is where Walter wound up, along with people from all over the world who became known as "red feet." The photo gives you a pretty big hint about the source of the name, but my book will tell you a lot more about Brazil in the 1930s. I found the history fascinating and hope you will, too. 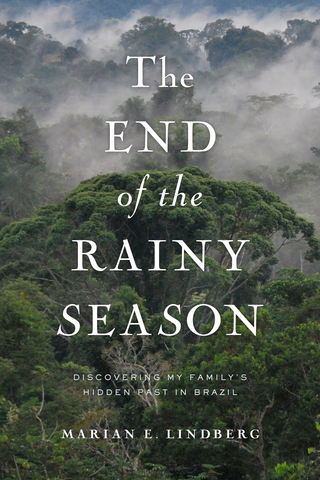 "FAMILIES ARE SO MIXED NOWADAYS. INDEED, AS A RULE, EVERYBODY TURNS OUT TO BE SOMEBODY ELSE." --Oscar Wilde

When I began investigating the supposed murder of a family member in the Amazon, I had no idea how applicable Wilde's quip would prove to be.

I grew up being told that Walter Lindberg, the man who raised my father, had been killed in the late 1920's while exploring the Amazon, looking for gold and making maps. Many years later, my search for the truth behind the story would reveal more about the family members I thought I knew than the supposedly exotic one I'd never met.

Readers have told me that The End of the Rainy Season helped them deal with their own family secrets. It's important to find and face the truth at any time. Better yet, speak openly and honestly within your family before emotional pain turns into the kind of shame that can be passed down through generations.

Through my work with an international environmental organization, I have learned that just as secrets within families often emerge later in anger or disguise, so, too, do nature's "truths" resist efforts to bury and silence them. In Brazil, destruction of the Atlantic Forest is a big reason why the major coastal cities of Rio de Janeiro and Sao Paulo have water crises. Worldwide, the increase in extreme weather events due to the climate crisis is another ominous example of how nature is the most powerful avenger of them all.

PRAISE FOR THE END OF THE RAINY SEASON:

"This intriguing journey of self-discovery reads as an exotic travel memoir as well." -- Booklist

"An adventure story, a family saga, an astonishing journey of discovery and identity."  -- Kristen Iversen, Full Body Burden: Growing Up in the Nuclear Shadow of Rocky Flats

"I was in thrall, page after page, awaiting the answers to mysteries past and present." -- Kathleen Finneran, The Tender Land: A Family Love Story

"In the end, many questions about the past will never be answered with any certainty, which leads to bigger questions: How do we move forward when our understanding is provisional? How do we make choices based on unstable knowledge? Ms. Lindberg’s big, ambitious book traces a path through this disarray, and in doing so she provides a map for the many migrations we face in the 21st century." --Professor Stephanie Wade, East Hampton Star

Scandal on Plum Island tells the neglected story of Major Benjamin M. Koehler, n distinguished Army officer who was blind-sided by charges of homoerotic behavior in 1914. "A couple of officers whom Ben has had occasion to correct have gotten a dozen or more soldiers to swear to a lot of lies," wrote Koehler's educated sister, who lived with him on Plum Island, NY, where Ben served as commander of a 700-soldier post before World War I.